Leave it to Sony to build a portable, wearable home theater around your neck. Available at the end of October 2021, the new Sony SRS NS7 gives “home theater” a new meaning.

Like a crazy coincidence, I was watching a movie last night with my partner and we struggled to hear the voices. I turned the volume up. Then suddenly an action scene plays, and we are scrambling to turn it down before we blow our eardrums out! We can’t be the only ones facing this issue?

Could the Sony SRS NS7 be the solution to all of our problems?

In this review, I’ll do a quick breakdown of the Sony SRS NS7. I’ll speak to the important specs and what is most notable about this release. I’ll also give you a breakdown of what I love, and what I don’t like so much.

By the end, I hope to have helped answer some questions about the Sony SRS NS7 and whether you may be putting in a pre-order sooner rather than later!

Join me in reviewing the Sony SRS NS7!!

Overview of the Sony SRS NS7

Welcome to your own personalized home theater experience! The Sony SRS NS7 is a new beast in a line of neckband wearing headsets. Claiming to provide non-stop entertainment, this device features a long battery life and comfortable fit. The Sony SRS NS7 is made from soft fabric and on the pieces that touch your neck, made from flexible silicon. This makes it easy to keep clean and its packaging lives up to Sony’s environmental commitment. 95% of all packaging is not plastic, making it easy to recycle. 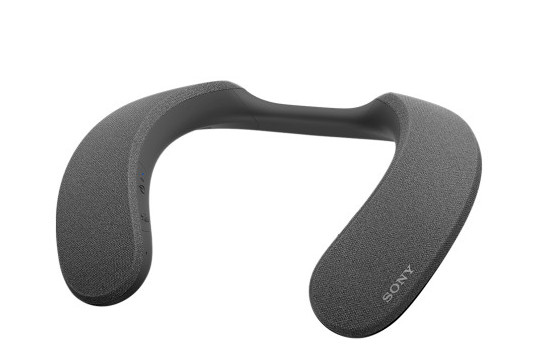 The neckband is used as any other type of headphone, featuring an open-ear listening experience, and delivering Sony’s amazing 360 Spatial Sound. Connect to your phone for music or, for the customers that work from home, take business calls comfortably.

The most dynamic feature to the Sony SRS NS7 device is its home theater capabilities.

This neckband is the first to deliver Dolby Atmos when paired with Sony’s BRAVIA XR TV’s and the wireless transmitter. A 360 Spatial Sound Personalizer app is available to personalize your listening experience. The app takes photos of the users ear and analyses their hearing characteristics by estimating the ears 3D shape. This will only work if you have a BRAVIA XR model of Sony’s TV’s and obviously the wireless transmitter.

While listening to music on your smart phone, you can use the 360 reality audio when using music providers such as Deezer, nugs.net, and TIDAL. 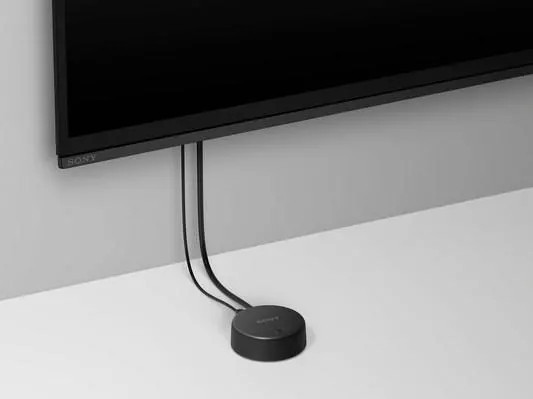 The transmitter allows you to connect any Sony headphone, buds or earphones to your TV for a similar experience. This device pairs via Bluetooth technology, and not only connects your devices but actively works to reduce the audio delay so users can be fully immersed and the sound can match perfectly.

Yes, this means you don’t necessarily have to purchase the SRS NS7 neckband to create a similar home theater experience.

More: Purchase the transmitter on its own below!

In order to achieve clear acoustics and powerful sound pressure, the Sony SRS NS7 features an X-Balanced speaker unit, which provides the optimum speaker size for a compact body.

In addition, the neckband features a upward facing speaker for delivery of crisp sound directly into the user’s ears, and a passive radiator that increases low frequency responses for clearer bass sounds.

Microphone placement allows the capture and delivery of voices to be precise, and the X-Balacned speaker unit reproduces voices clearly.

The Sony SRS NS7 is optimized with echo cancelling features to minimize feedback and ensures you’re heard loud and clear on the other end of a call.

As with the newest Sony headsets, the Sony SRS NS7 has multi-point connections. This allows the user to connect to multiple devices at one time. For example, if you’re listening to music on your laptop, and a call comes in on your smartphone. If the neckband has been previously connected to the phone it will give you an option to switch to answer the call. When the call is done, it will switch back to the previous listening device.

This neckband comes with a 12-hour battery life, and 5 hours at full volume. If you’re stuck in a bind and need a quick charge, an easy 10 minute charge will give you 60 minutes of additional listening time.

The Sony SRS NS7 is IPX4 splash-proof. Although not built to be brought out of the home, it will withstand minor dust and water exposure.

I am really cut down the middle with this device, and have equal amounts of great things to say, and not so great things. Lets start with the great!

This headband is exactly what I am looking for in late-night movie watching while I am alone. I love that it connects with your TV, and gives an ultimate surround sound experience without worrying about how loud you are or struggling to hear speech.

Having tried it on, this band is extremely comfortable. It’s lightweight and you don’t notice it on at all!

Although I can’t see me needing to, this device is easy to wipe clean if you get food or debris on it.

The 12 hour battery life is pretty good considering what you would use this neckband for. It’s not really designed to be brought out of the house, but obviously can be. This battery life is dependent on how loud you user it at and for how long too.

What I Don’t Love…

Soooo… what I am not super fond of.

Although it is lightweight.. It’s bulky, and looks a bit silly around your neck. It reminds me of something an astronaut would wear or something haha!

A lot of their best features are only available if you own a BRAVIA XR model of TV in correlation with the wireless transmitter. Things like the 360 Spatial Sound personalizer won’t work without the right TV model. This eliminates a lot of what this head band considered as an advantage against competitors.

I think the real hero here is the WLA NS7 wireless transmitter. This transmitter can take any Sony Headset, band, or bud and convert it into a surround sound experience with your TV.

Hopefully I’ve helped you understand this new device better and come to a confident purchasing decision!

Leave comments and questions below! Check out my other reviews here 🙂

JBL Flip 6 Review – The newest update to a popular speaker