Monster Inc has a long history, most recently adding to their line-up with the Monster Blaster Boombox in December of 2021.

Monster was founded in 1979 by an audiophile and professional drummer named Noel Lee, where he started by making audio cables to optimize the sound industry. He quickly learned that different speaker wires delivered varying degrees of performance, and made it his passion to develop the best of the best.

Quickly over the decades, Lee and his company Monster became the world’s leading manufacturer of high-performance consumer electronics accessories.

To this date, Monster is seen to develop accessories, headphones, speakers and many more. However, you’ll know them best for their Beats headphones, recently bought out by Apple in 2014.

Today, we are doing a quick overview of their most recent launch of the Monster Blaster Boombox 3.0! 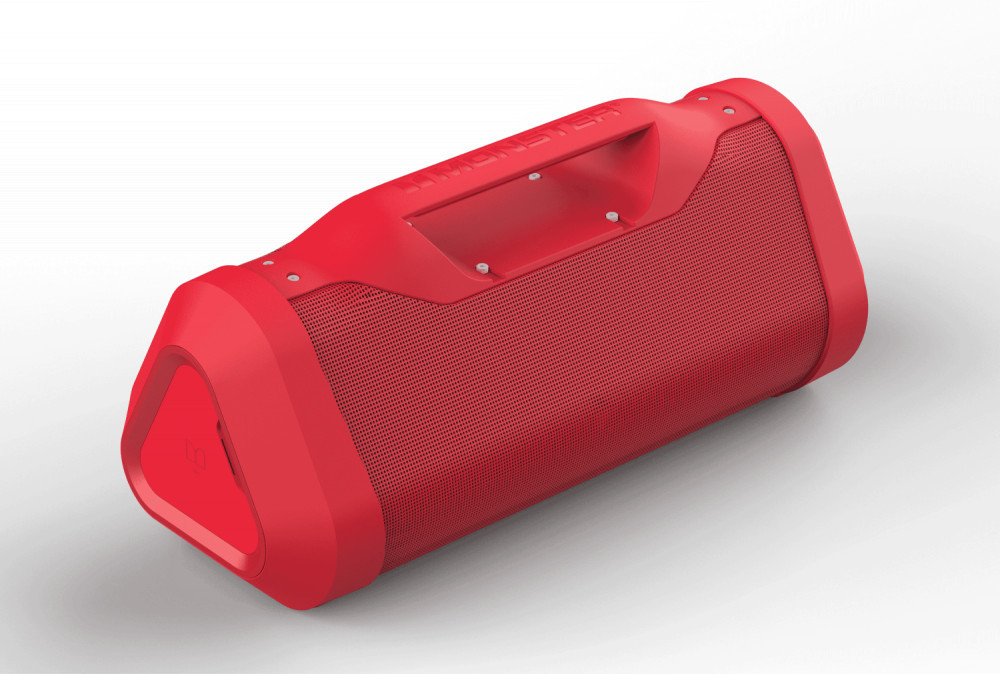 The Monster Blaster Boombox 3.0 was released in December 2021, just after Christmas. It was designed to replicate the old 1980’s ghetto blasters, something you can throw over your shoulder, take anywhere with you, and rock the socks off of those around you. I think Monster was successful!

The Blaster has 120 watts of power that penetrates the space around you. It has two different modes to automatically adjust whether you’re indoors or outdoors.

The environmental EQ automatically optimizes your music to sound loud and clear, depending on how closed-in you might be, or how much free space is around you (indoor/outdoor). The music tunes in response to bouncing off close walls, or filling large spaces.

Besides being Bluetooth enabled, it supports Android NFC pairing as well. It has 12 hours of battery life, and takes about 3.5 hours to charge fully from a dead battery. It charges via a standard USB-A charging port.

Losing power on your Bluetooth device/phone? The Blaster features an integrated battery cell for charging abilities. You won’t ever have to worry about your phone dying on you!

Although this device is designed to tote around with you, it is only IPX5 rated, and has minor water resistance. Be careful taking it to the beach or pool with you, as it won’t be as protected as necessary in some situations.

A cool feature that you don’t see with many or ANY portable speakers is a mic-in jack, allowing you to connect a mic for karaoke, announcements, or if you’re DJing or an MC for an event. The music will play over top of the mic for that fun karaoke night, or will function on its own without music.

There is no app for this device, so the indoor/outdoor EQ is all the functionality you get in regards to sound, and does not have a built-in mic, so hands-free calling and smart assistant capabilities aren’t there. 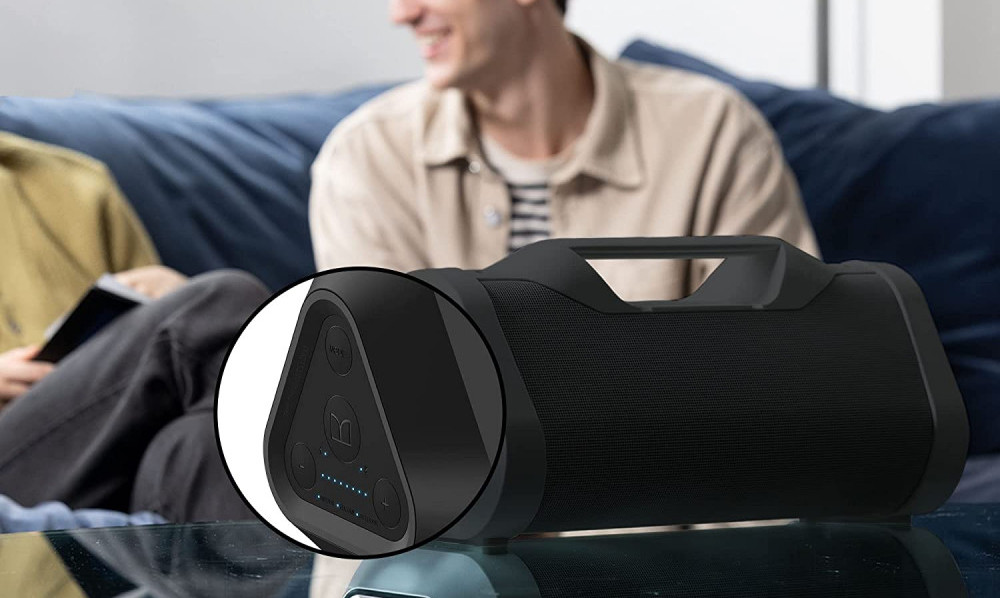 The Boombox comes in three colors, white, black or red. Red seems to be the most popular, making a very aesthetic impact.

The controls for this device are located on either end of the speaker. On one end you’ll find control buttons for indoor/outdoor modes, Bluetooth NFC pairing and no app needed to pair, LED lights to indicate what mode you’re in, volume +/-, as well as LED lights to indicate how loud your device is currently set to.

Monster designed this device exactly like the old Ghetto blasters. However, it’s slightly smaller and maintains that duffle suitcase style. It has a large handle along the top, with rubber underneath for an easy grab.

The solid rubber feet underneath help to minimize distortion and vibration when it’s really pumping out the music. There’s a steel mesh that covers 90% of the device and speakers, with industrial-grade rust-proof paint. 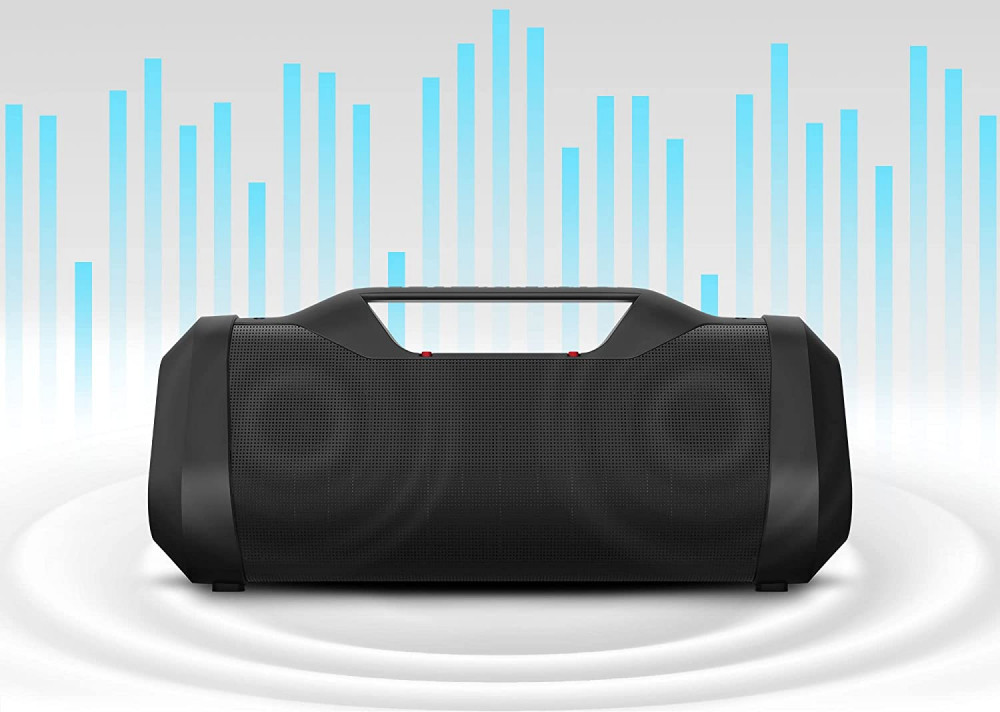 This speaker is designed to knock your socks off. Music is the game, and sound is the goal.. I think Monster did a decent job with it.

Featuring 7 different speakers and an independently powered 60 watt subwoofer, this speaker has dual stereo sound, and omni-directional audio. The music radiates from both sides, giving you a 180-degree sound profile. Try not to put it against walls, or you may lose a lot of that sound profile.

The second you turn this speaker on, you know it’s made to pump music. Being on an indoor EQ at level 4 you get an impressive amount of sound from it. However, the bass is much less dominating, until you select outdoor. Outdoor is definitely designed to push the music further, and assumes there’s a large space to fill, so you hear the lows, mids and highs become clearer instantly compared to inside.

Turning it full volume distorts slightly, but definitely made my eyes go wide. I was impressed with just how loud it really got.

The quality of the sound is decent, even at high levels, but this isn’t a speaker for listening to the finer details within the song. The purpose of thise speaker really is just to push music out as loud and far as you can get.

Cons and Other Considerations

If you are purchasing this speaker for the sole purpose of creating large sound, and entertaining large groups of guests, then its a great speaker. If you’re simply looking for a portable speaker for inside, and the occasional small get-together, I suggest taking a look at some of my other reviews.

This speaker rings to a total of $400, which is a lot! So if for whatever reason your goal isn’t to fill large spaces for loud music, look elsewhere. I think $400 is a big price for this speaker, but if it suits your purpose I think its worth the money.

However, for the purpose of this device, I think they hit pretty darn close to home, and you feel nostalgic using this device if you thrived in the 80’s!

My Verdict: Loud, but expensive!

The Monster Blaster boombox definately delivers on its loud presence promise. It fits the bill almost to a ‘T’, but comes with a very large price tag.

There are a lot of speakers out there for the same, if not cheaper price that may not fill as much space as this device can, but suit a sufficient music/pupose.

If you’re having second thoughts at all about this device, check out some of my other reviews for perhaps something a bit cheaper, that suits your needs more effectivly.

JBL Flip 6 Review – The newest update to a popular speaker