The Under Cabinet Speaker

This ILive Bluetooth Speaker Review comes at a time when everyone is starting to search for that optimal Christmas present for the techy who loves being in the kitchen. A speaker that features radio, CD and Bluetooth capabilities are very far and few between.

Designed to mount under a kitchen cabinet, the iKBC384S is one of the very few under the cabinet speakers on the market today, and contains features you don’t normally see from Bluetooth speakers anymore. Have a favorite CD, or perhaps a long-time radio station you always listen to but cannot find kitchen space to place a speaker? Yes, this speaker is designed not only to connect through Bluetooth from your phone or devices, it also features what some may consider “archaic” functions such as a radio signal and CD playing functionality.

Although some may say it feels cheap, it has an affordable price, it is easy to install, and features CD, Radio and Bluetooth capabilities. This speaker could be an amazing gift for a specific someone.

Check out some of my other reviews here!

Every time I’d go visit my grandparents, I would always be so enthralled with this speaker they had hanging from their cabinet in the kitchen. Even cooler was that it was connected to multiple ceiling speakers around the home in different rooms. I felt guilty because the only reason I liked visiting them as a young kid was to play with this system. At that time, it was considered very high tech and expensive.

These days there’s so much more technology beyond that simple system, but that doesn’t mean there aren’t consumers still searching for something similar.

A lot of the time, kitchen counter space is at a premium, and finding room to place your speaker for some cooking music isn’t as easy as it sounds. The iKBC384S is designed to save that space, and offers multiple functions to play music any way you feel. Included with this speaker is a remote to easily change power from on/off, change track, open/eject CD, volume, play/pause ect. It also features a battery backup power, with two AA batteries (not included). You don’t have to worry about plugging it in if you cannot reach an outlet.

It also features trivial functions such as a timer, if you don’t already have one in your kitchen, and a digital clock.

Despite what anyone says, radio is still hugely in demand, and people (young and old) still enjoy turning on the local radio and listening, or pulling out that old CD for your favorite artists top hits. This speaker really has it all, and allows Bluetooth connectivity on top of that!

The iKBC384S was released in April 2014, and isn’t the newest speaker on the market. However, it is a solid product and received a 4.1/5 star rating on Amazon. It comes in only the one color, silver, and is priced at $95.77. This item has seen a 47% price increase over the last year, and my assumption is that people are getting back into their CD collection and radio tunes. 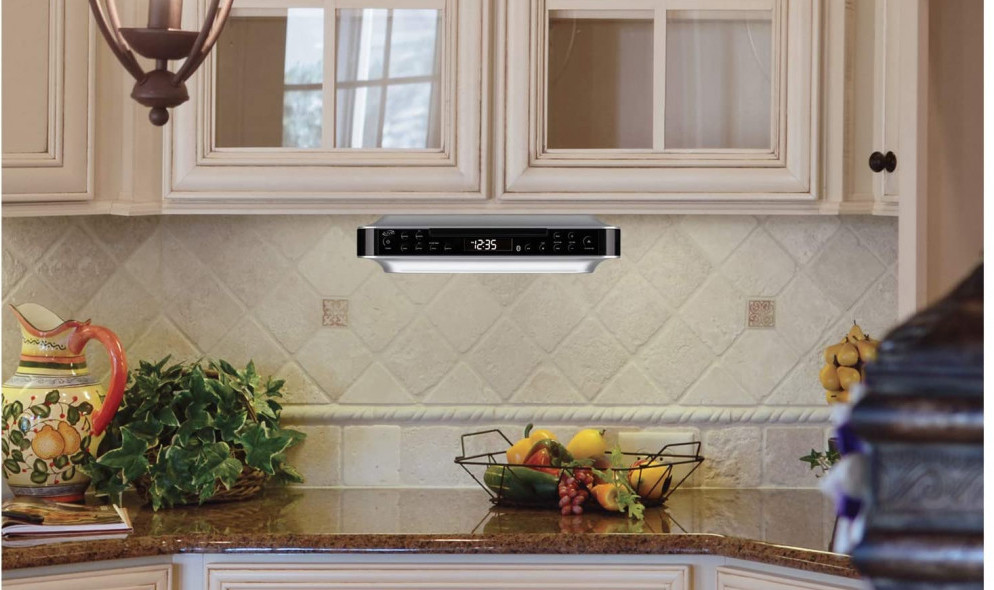 Tallying up to measure 11.42 x 11.54 x 2.87”, this speaker is slim and compact. It weighs just under 4 pounds, and includes a mounting kit with spacers to be attached to any cabinet space. It carries a UFO shape, and looks sleek when mounted in the right spot.

Along the front of the device you’ll find numerous buttons, such as:

It can be plugged in either through the AC/DC adapter,included with the device, and plugged into the right hand side of the device, or with its back-up battery powered with 2 x AA batteries.

Don’t have a smart phone, or perhaps you have an old MP3 player you want to plug in? This device also has an AUX cord plug-in.

Sound really is the most important aspect of a speaker, and the other functions just add to its overal appeal.

With this speaker specifically, it only carries 1 watt of power, so the sound isn’t going to bring any roofs down with it! hah.

This is a simple speaker, and you’ll get simple sound from it. Due to it’s size and power, it will be meant for small spaces and, if placed under a cabinet as designed, you will get a bit more push from the reflection off the back wall.

Reviews indicate the sound is decent, and customers are happy with the device when used as it was designed. The single speaker driver is placed under the device, so the sound carries down and out of the device.

Although you won’t find the information online, it’s to be assumed that since this device only has one speaker, its a mono system as opposed to stereo.

As the volume gets louder, consumers complain of a slight tinny sound, with no way to adjust EQ.

What I Love About This Speaker!

Before I indicate either we have to remember, this speaker was released in 2014, and so much has happened since then. However, it’s one of few that offer CD, Radio AND Bluetooth. The versatility of this device is its biggest feature, and I believe it can be enjoyed by all of the family whether young or old.

I like that it’s designed for under the cabinet, leaving space for your cooking needs, and features a timer and clock. Although many people have these features on ovens and microwaves, its nice that it has it.

I like that you can plug it into an outlet, but love even more that it can also be battery powered.

Once you’ve paired a Bluetooth device, it has automatic pairing and will remember that device forever.

Let’s admit it.. this speaker isn’t the hottest thing in town. She isn’t a looker, and you can tell it’s dated. Although it may pull out all the stops of versatility, it carries a cheap and inexpensive feel to it. The buttons feel cheap, and the device’s body and structure feels thin and weak.

The radio feature is a bonus for a lot of customers, but doesn’t feature a AM setting, only FM.

There is no EQ function, so the sound you get is the sound you keep. With only 1 watt of power you won’t get enough volume to spread out into a giant kitchen and dining room, even though it would be suited for simply being in the kitchen cooking.

The price is a bit steep for some, but with the overall satisfaction rating it doesn’t seem to bother most consumers.

My Verdict: The Best Of All Generations

There isn’t anything you can’t do with this speaker and I believe this is what really helps this speaker win. It is a speaker of its time, and the design and make of it shows that very clearly.

This speaker is perfect for a smaller kitchen with a small corner nook to place this speaker under the cabinet. It will present decent sound at mid volumes and will be out of your way regardless of how much counter space you have.

I would suggest that if you’re using this speaker for the purpose it was designed for I think you’ll be very happy!

Let me know your thoughts below!

Best Rated Outdoor Speakers – And How To Make Them Bluetooth